In the blink of an eye I was sandwiched between nearly 40% of the world’s population (China and India), as I stepped into another culture to learn about my own. This was no ordinary place or country, it was Nepal. I was walking on holy land where Buddha was born, and the world’s highest mountain peaks stand. A place where the  cow is sacred and often seen roaming the streets aimlessly, as if they were homeless gods. And this was just the beginning.

Each morning around 5:30am, I woke to the sound of bells and gongs as visitors entered the nearby temples in early prayer.  As I yawned to wake myself up, I could see my breath pass though the cold crisp morning air. Following a refreshing ice cold shower, hardboiled egg, toast and luckily some instant coffee, we were out the door onto our mission. King Tulsi, lead the way as we visited numerous schools, orphanages, Rotary project meetings, and villages throughout Nepal. The momentum never stopped. We hiked through villages, four-wheeled through mountainous terrain, and darted in and out of the chaotic city traffic on the backs of Rotaract scooters to get to our destinations. The rides were almost always death defying. But if I closed my eyes, crossed my fingers, and hoped for the best, we would always make it to our destination alive.

Each place we visited, I couldn’t help being shaken by the poor conditions and lack of resources of each site; at the same time inspired by the spirit and resilience of the Nepali people. One school that stood out the most was The Bamboo School in Patan, Kathmandu. It was made completely out of, well, bamboo. It was held together with traditional mud bond and wire, supporting the walls and ceilings. The first thing that came to mind was the story of The Three Little Pigs.  Lucky there was no Big Bad Wolf in sight.

We spoke with the teachers and listened to their ideas on how to improve the conditions of the school. Clearly a need for urgent repair and upkeep was necessary, but water and dust management seemed to be on their priority list. After assessing the situation, we discussed our ongoing commitments to further support the school. We also listened to the children, as they played in the dusty playground. Their laughter and smiles were filled with confidence, spirit and gratefulness while we distributed school supplies donated from the USA. Most noteworthy was their ability to speak English. The students gracefully thanked us in our mother tongue. They also wrote short stories for us in English about their dreams and aspirations of being doctors, flight attendants, dancers and the like. In that moment I thought about my own culture and our children in the USA, and wondered. 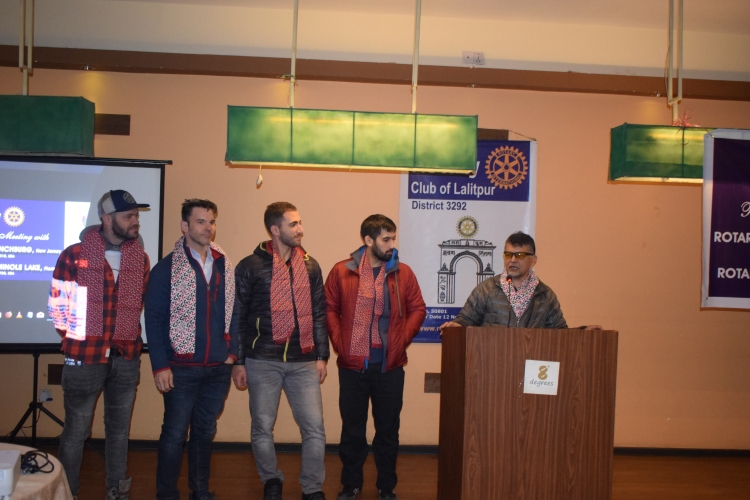 But just before I had time to think, the ASHA Team of five are squeezing into a small four passenger taxi heading to our next mission. It was during these long and treacherous rides that we began to taste the dust of the Kathmandu Valley, and really bond as a team. We then transferred to a large off-road bus that was of full of colorful tapestries that hung across the front dashboard and windshield. Full of Rotaract students, we packed in like sardines and headed for the mountain top. We didn’t miss a bump, not even one. When I looked down at the steep cliffs of death below, I realized the bumps are what kept us on course and safe. When we reached the top of the mountain overlooking the entire Durlung Valley, we were greeted by the villagers like royalty, underneath a majestic white temple. At that moment I begin to swallow my pride as something touched me deep inside my heart. I could feel the gratefulness glaring from the villagers’ eyes. It was hard to described but enough to make me pause life for one still moment, like everything stopped around me.

There, we delivered 25 goats, distributed school supplies to the children, and planted numerous trees together with the villagers on this very holy site. To end each mission, Tulsi would deliver an inspirational address, that lifted the spirits, hopes and dreams of not only the villagers, but to all who were listening that day. Where there’s is a will, there’s is a way!.

Just when we thought the day was coming to an end, as we looked at each other’s exhausted dust covered faces, King Tulsi would suddenly remind himself that we have another site to visit before dinner. Without much hesitation, the five of us jump into another four-passenger taxi and head for an orphanage. We entered the steel gates of the St. Xaviers Social Service Center and were greeted by 50 or more orphans, of all ages and backgrounds, from every corner of Nepal. They gathered in a big circle and very impressively introduced themselves to us in English. We then distributed school supplies and listened to their dreams and aspirations of becoming doctors, singers and social workers. One child that stood out, who I seemed to easily bond with, wanted to be a business man. I thought that he was brave and I was tempted to give him an extra pencil or two. But all in all, the children were filled with spirit and determination to seek a brighter future. I was taken by how grateful and ambitious they were, considering their circumstances. It was an experience I will never forget.

We closed each evening snacking on Dal Bhat, Momo, and of course, washing it down with some local spirits as we reflected on all the places and hearts we touched that day. Like many who describe their brief travels to Nepal, I could write a book. It was one of the most fulfilling adventures I have had in a long time. A true honor to serve those in need. This was an experience I wish upon anyone. I would do it again.  As one of my dear Nepali friends said to me while we strolled along Phew Lake in Pokhara, “Everyone comes back to Nepal”. I think she maybe right

Till my next visit.

The Asha Project – works in collaboration with local and international partner organizations as well as individuals and governments, to provide HOPE and OPPORTUNITIES for the people of Nepal. We thrive at the intersection of Passion, purpose and Promise. View more posts

One thought on “My Nepal Story”

This site uses Akismet to reduce spam. Learn how your comment data is processed.